Europeans For Medical Advancement (EFMA) is available in Europe for consultation on the scientific aspects of using animals in testing and research. EFMA represents the patient advocacy organisation Patients Campaigning For Cures (PCFC). Established in 2014, PCFC is a campaign run by patients for patients to speed up the arrival of new treatments and cures, and is founded by a young lady with multiple sclerosis. EFMA also advises the organization For Life On Earth (FLOE). Since its launch in 2013, FLOE has established a campaign with MPs at the UK Parliament.

Members of the UK Parliament are signing Early Day Motion 175 (EDM 175) which spotlights the new national exposé of 21st June 2021, showing harrowing footage of the intensive breeding of laboratory dogs in the heart of the British countryside. The EDM goes on to call for the Government to mandate a public scientific hearing on animal experiments, judged by independent experts from the relevant fields of science: including clinical research, evolutionary biology, basic research, chaos theory, complexity science, philosophy of science and drug development. The EDM's called-for science hearing will be able to stop the funding of the now proven failed practice of animal modelling, and redirect those valuable funds towards human-based research, which comes with a track record of success.

The Conditions for the EDM's science hearing are endorsed as “well set out and fair” by Britain’s human rights defence barrister Michael Mansfield QC . These conditions are also what AFMA endorses for hearings in the US. A recently published book chapter by Dr Ray Greek and finance professor Lisa Kramer titled 'How to evaluate the science of non-human animal use in biomedical research and testing: a proposed format for debate' outlines the format for this peer reviewed science hearing.

In 2019, Ricky Gervais filmed himself in conversation with leading medical expert Dr. Ray Greek, in what is now being hailed as a groundbreaking film discussing the false claims about science which fund animal-based research: 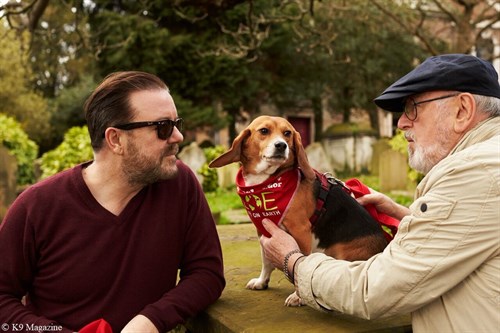 In September 2018, Scarlett was awarded the coveted Daily Mirror, Animal Hero Award 'Inspirational Animal of the Year' for her part in helping Ricky Gervais call for a rigorous public science hearing, judged by independent experts from the relevant fields of science.

SCARLETT BEAGLE'S SOCIAL MEDIA PAGES have become a global focus for current scientific knowledge and FLOE's campaign for a science hearing to end animal experiments. Visit Scarlett's twitter page and her Facebook to keep in touch with updates.

EFMA HAVE A TRACK RECORD OF SUCCESS IN THE UK

Having given many BBC radio and television interviews, Dr Greek and EFMA become the chief scientific witness for an historic animal protection coalition in 2002/2003, formed to oppose plans by Cambridge University to build a new non-human primate laboratory - one of the UK’s most high profile planning applications. Cambridge University applied to build their new lab on Green Belt land, and therefore had to prove claims that experimenting on non-human primates was scientifically and medically in the ‘national interest’. After a two week inquiry, in which EFMA submitted a written Proof of Evidence in addition to five hours of oral witness testimony from Dr Greek, Cambridge University's plans to build this lab were defeated with a precedent ruling on medical and scientific national interest grounds. The laboratory was not built after the Government Inspector ruled: ‘On the basis of the technical input, therefore, I could not conclude that need in the national interest is demonstrated insofar as this pertains to the scientific/medical research and procedures undertaken by the University’.

Please watch this space for further news about EFMA.